Back in October 2021, we were joined by 12 enthusiastic young people, keen to learn new skills and make their own short films. This was the start of the Artist Film Academy, one of our annual free academies run by the Learning & Participation Team for young people between 15-19 years old, and our first in-person learning activity since the start of the pandemic!

The Artist Film Academy encourages young people to explore films that are generally considered more conceptual and experimental in style, and supports them to make their own short films in this genre. Alongside this they learn practical skills in camera, lighting, sound, directing and editing.

Some of the participants had made films before, either with friends or at school, while for quite a few this was their first filmmaking experience. Everyone had their own reasons for getting involved, but a universal love of film was clear. Georgina applied because “I love watching films and always wanted to know the process behind it all, and I also love art so I thought it would link in nicely”; while Joseph says “The course appealed to me because of my love of film and moviemaking and my desire to learn skills and meet new people.”

We were working around a theme titled ‘End/Future’ which considers some of the key issues and concerns of our time. We looked at films related to the Climate Crisis and how artists have responded to the Pandemic. Through a process of discussions, mind-mapping, walks and talks, the group became two smaller crews and began to firm up key interests. 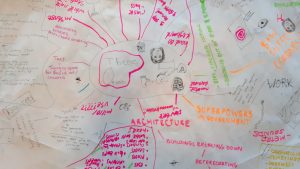 Developing ideas. A lot of ideas.

Two really interesting and super-creative films emerged; ‘We Interrupt Your Broadcast’ and ‘Keeping Watch’. Check out the links at the end where you can watch them!

The filmmakers discuss where their ideas have come from:

“We Interrupt Your Broadcast is a dystopian film based on the idea of desensitization” says Adam, “our ideas come from the covid pandemic and the experience of a daily death count on the news becoming normal and part of our routine”

Meanwhile in the other group, Mia explains “Keeping Watch is about surveillance and a lack of privacy within society. We all believe this is a big problem at the moment and something that will likely become more dominant in the future.” 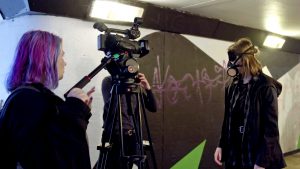 On location for ‘We Interrupt Your Broadcast’

The Academy aims to give young people as much ownership and control in the development and making of their films as possible. Films are shot on-location and with the support of a mentor, with participants taking on different roles within the group.

Faye describes this experience: “The course allows everyone to partake in a variety of roles and each of them were really fun. My favourite were editing and setting up the scenes, which was surprising as before I thought my focus was directing and writing.”

It’s a steep learning curve however, and not always easy. “Editing has been quite challenging but I really enjoy it” says Fatima “it can be slow and sometimes confusing, but this has helped me learn patience and I know that the hard work will pay off.” 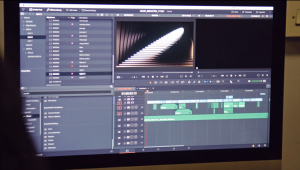 The work premiered at a celebratory showcase event at Tyneside Cinema in January to an invited audience of friends and family. There was a great turnout and it was brilliant to see the films projected onto the Electra’s huge screen and celebrate everyone’s hard work properly.

Thinking about what they will take away from this experience, Macy says “I’ve really learnt a lot about how to work as a team”, while Ryen says “I’ve made new friends and developed new knowledge and a better understanding of the work that goes into films”.

Many of the filmmakers are moving onto Film Studies A-levels, or for some, film related degrees at University. We wish them all the best and hope to see them back at Tyneside Cinema again soon!

More information on the Artist Film Academy and the Learning & Participation programme at Tyneside Cinema can be found here!