Our sous chef for the Tyneside Bar Cafe kitchen has designed a brilliant new menu with a focus on locally sourced, organic produce with an aim to give back to our North East community. We met up with the lovely guys who supply our wonderful mushrooms and had a chat to find out all about their company - the fabulous YMCA Urban Mushrooms! 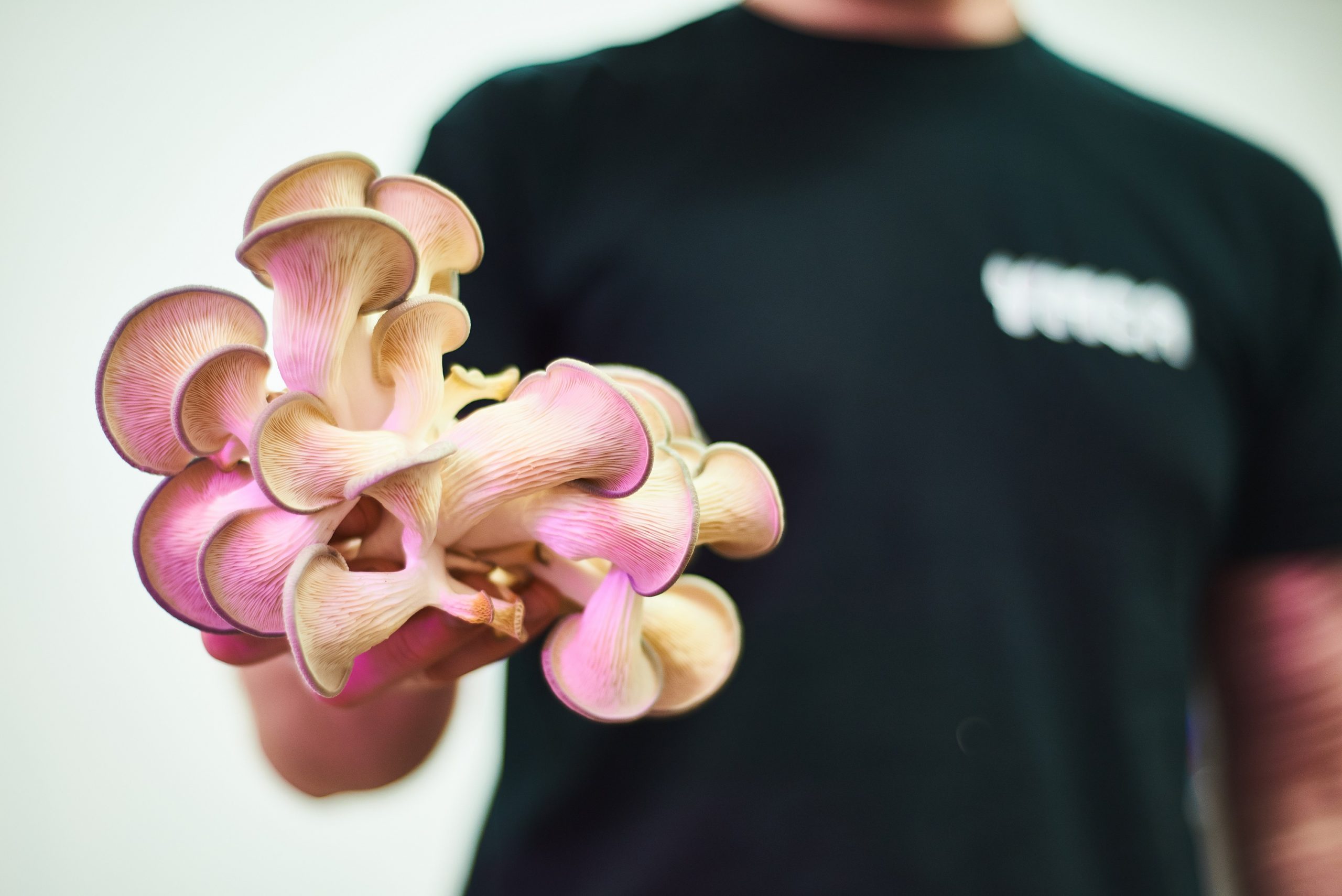 We met Calvin from YMCA Newcastle and John and Cameron, who run the mushroom side of things, and got a real insight into this wonderful local initiative. Calvin is part of the marketing department and works closely with the Youth Team at YMCA Newcastle: the team do a lot of great out-reach with young people in Byker, Walker and all over Newcastle. He tells us how working-class families with generations of links to ship-building have been left out in the cold since these industries have dried up: ‘We’re getting on for three generations of unemployment in some places.’


YMCA Newcastle has a range of projects that aim to support and engage young people from these backgrounds, as well as anyone who has struggled with school, or feels forgotten about in society. Calvin says that 50% of Newcastle’s kids leave school without 5 GCSE passing grades, and he points out that those jobs that you might’ve walked straight into from school (customer service, bar work, for example) are being scooped up by the huge student population. Clearly, there’s a massive need for the YMCA Youth Team in Newcastle, and their collaboration with Urban Mushrooms gives opportunities to young people where they are lacking them.


The thing that differentiates the Urban Mushrooms from a lot of other community projects is that it’s a legitimate business – it makes a profit, sells a product, there’s the status of a ‘proper job’ as well as money in your pocket – not to mention the skill and hard work that goes into growing, cultivating, farming the mushrooms. The guys tell us about one young person who recently came through the Urban Mushrooms project and has gone on to get an apprenticeship as a Royal Navy mechanic – this initiative is a stepping stone for young people, and is making real change in their lives.


So, what’s it like to work in the mushroom-farming business? Well, according to John, it’s actually ‘a fairly therapeutic environment’. ‘You can’t make these guys grow any quicker than they’re gonna grow. It doesn’t matter how anxious you get, they’re gonna do what they’re gonna do. And then [there’s] the satisfaction of seeing what’s gonna happen.’ Apparently, these oyster mushrooms grow twice in size each day! 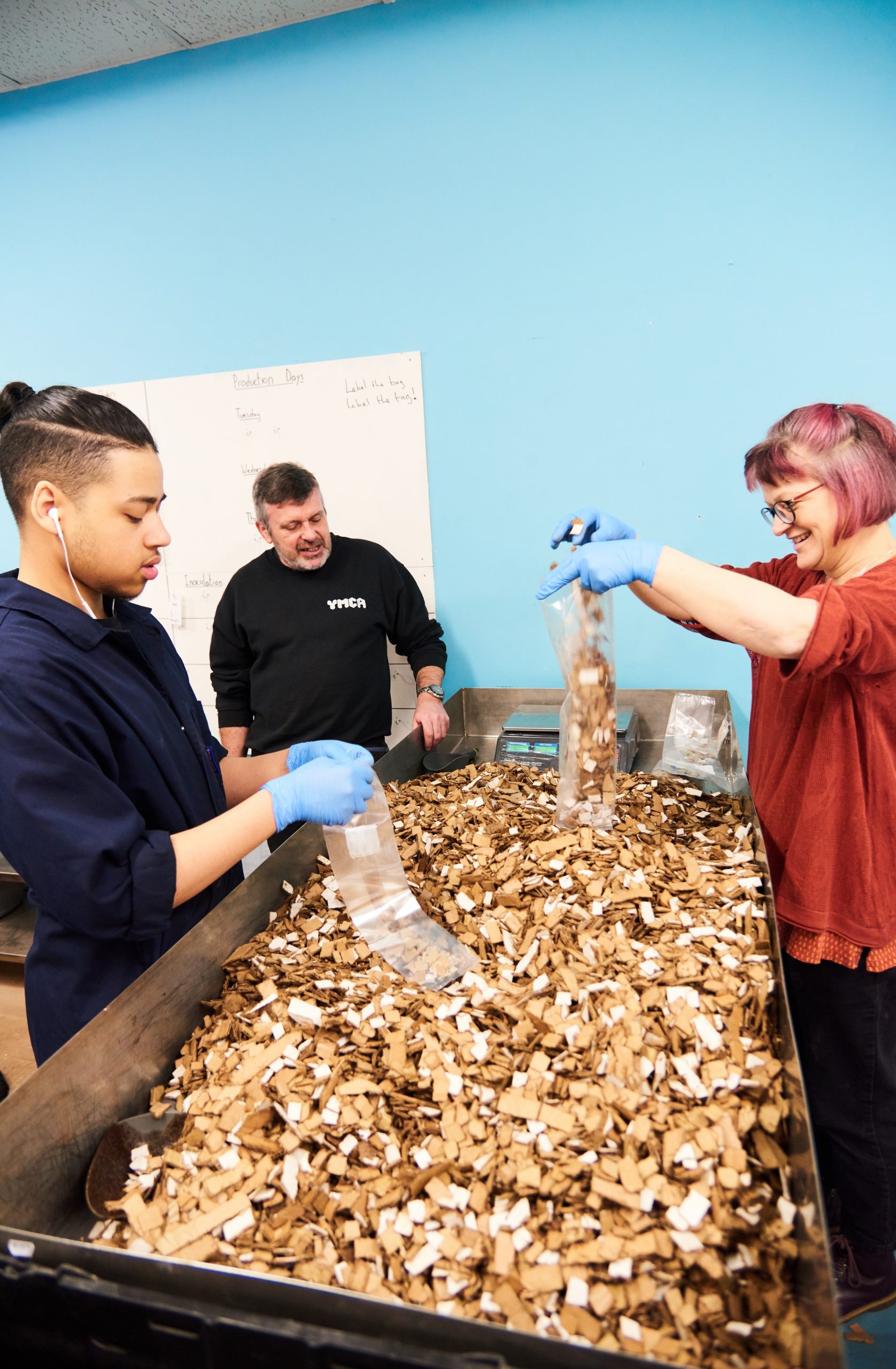 So, we were wondering how you might get into such a peculiar and specific trade? John has long worked in farming, and with young people and so YMCA Urban Mushrooms seems a natural trajectory. And for Cameron – well, his obsession began with a quest to grow a glow-in-the-dark mushroom, which is not actually as ridiculous as it sounds. Cameron tells us about the ‘Angel’s touch’, a luminous mushroom that grew in the wreckage during the American Civil War, would fester on the wounds of soldiers, but because it secreted an antibiotic it would help to prevent infection, hence its name! His quest has been indefinitely put on hold, however, as the Urban Mushroom company scooped him up, along with his impressively wide-reaching mushroom knowledge, and as John puts it, ‘we’ve distracted him for five years’.


If he ever gets back to the luminous mushroom venture, we want to bagsy some for our Tyneside Cinema office desks! John and Cameron are very knowledgeable about – and big advocates for – the humble mushroom. Fungus can get a bit of a bad rep, but they are incredibly diverse and versatile (as demonstrated by the amazing benefits of the Angel’s Touch). Mushrooms can even talk to each other – and the largest organism on the planet is a honey fungi (also known as the Armillaria mellea).

The guys were kind enough to bring us in some of the oyster mushrooms, which we ate raw – they were incredible, with a good bite and a kind of tangy flavour. Cameron informs us that some people have a gene that can make the mushroom taste spicy, and I am really wondering if that’s me! That ‘bite’ makes these oyster mushrooms the perfect meat or fish substitute (look out for this on the Tyneside Cinema Bar Cafe Menu!), and the trunk apparently makes excellent substitute scallops. Sliced up, it looks quite like scallops too, which as John points out, is very important: ‘It imprints on you… so you think it’s gonna taste like what you expect it to.’ Cameron agrees, saying ‘You eat up before you actually taste it’. That old adage about eating with your eyes first clearly has something to it! The mushrooms contain loads of protein and barely any fat, which also makes them a lot healthier than meat: a great option all round.

So, we’ve learned about the project, we’ve tried the product, what about the process? John and Cameron talk us through YMCA Urban Mushrooms’ growing process, which is completely waste free and even helps to recycle waste products! They start with used coffee grounds, which just so happen to be perfect for mushroom-growing. In the beginning, they would take a sort of wheelbarrow-cart all over town (by foot!), collecting the coffee grounds from local businesses on a weekly basis – even collecting grounds from our very own Vicolo! After some time and a very worn-out cart, a local coffee and tea company offered them ‘700kg right now, just bring a van’, and they’ve been collecting from them ever since. They now collect over a tonne every week! Not such a small project anymore…

Once the mushrooms are grown, they are able to use every last one of them. Any ugly mushrooms are used to make Oyster Mushroom Powder – a delicious Umami-like powder that can be added to dishes (again, look out for this in Tyneside Cinema Bar Cafe menu) for extra nutrition and flavour. John – and his harshest critic, his wife – recommend adding it to a Spaghetti Bolognese. Other local businesses are also using YMCA Urban Mushrooms in lots of wonderful ways – you might find them on Ouseburn-based Cook House’s menu or in Flat Caps’ ingenious whiskey-made-from-mushrooms! Further afield, (sister company to YMCA Urban Mushrooms) the Espresso Mushroom Company have found themselves onto the shelves of Selfridges and YMCA Urban Mushrooms are even getting shipped down to Kew Gardens! 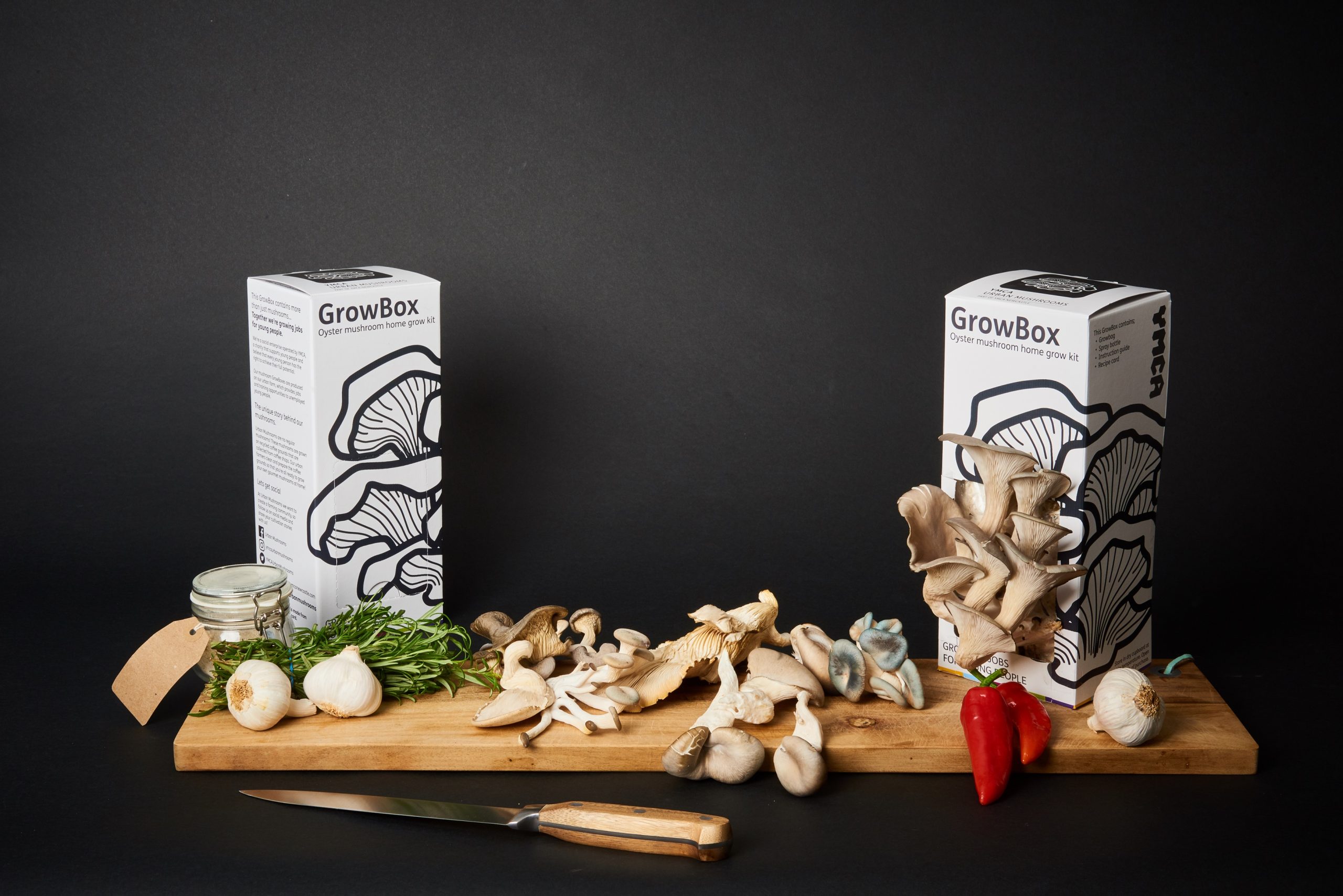 Once the mushrooms are all used up, the remaining soil makes a brilliant compost – as discovered by a local (and competitive) gardener whose mushroom soil-grown vegetables gained a prize for being impressively large! The compost also goes to the upkeep of the allotments up at Gibside, the stunning National Trust property on the edge of Newcastle.


According to John, Urban Mushroom have tapped into a community of environmentalists and local business owners in Newcastle that have a culture of helping each other out instead of competing – with the aim of all remaining economically viable. As Calvin says, ‘This mirrors the founders of the YMCA who were the big industrialists of the time’, who used their wealth to establish the organisation, give back to the community, and help to ensure everyone could feel valued in society. That seems like a lovely full-circle for YMCA Urban Mushrooms.
Next time you order something with mushrooms in from Tyneside Cinema Bar Cafe, you might think of how your locally sourced, organically grown ‘shrooms are giving back to the North East community – and you can feel pretty good about yourself as you chow down. 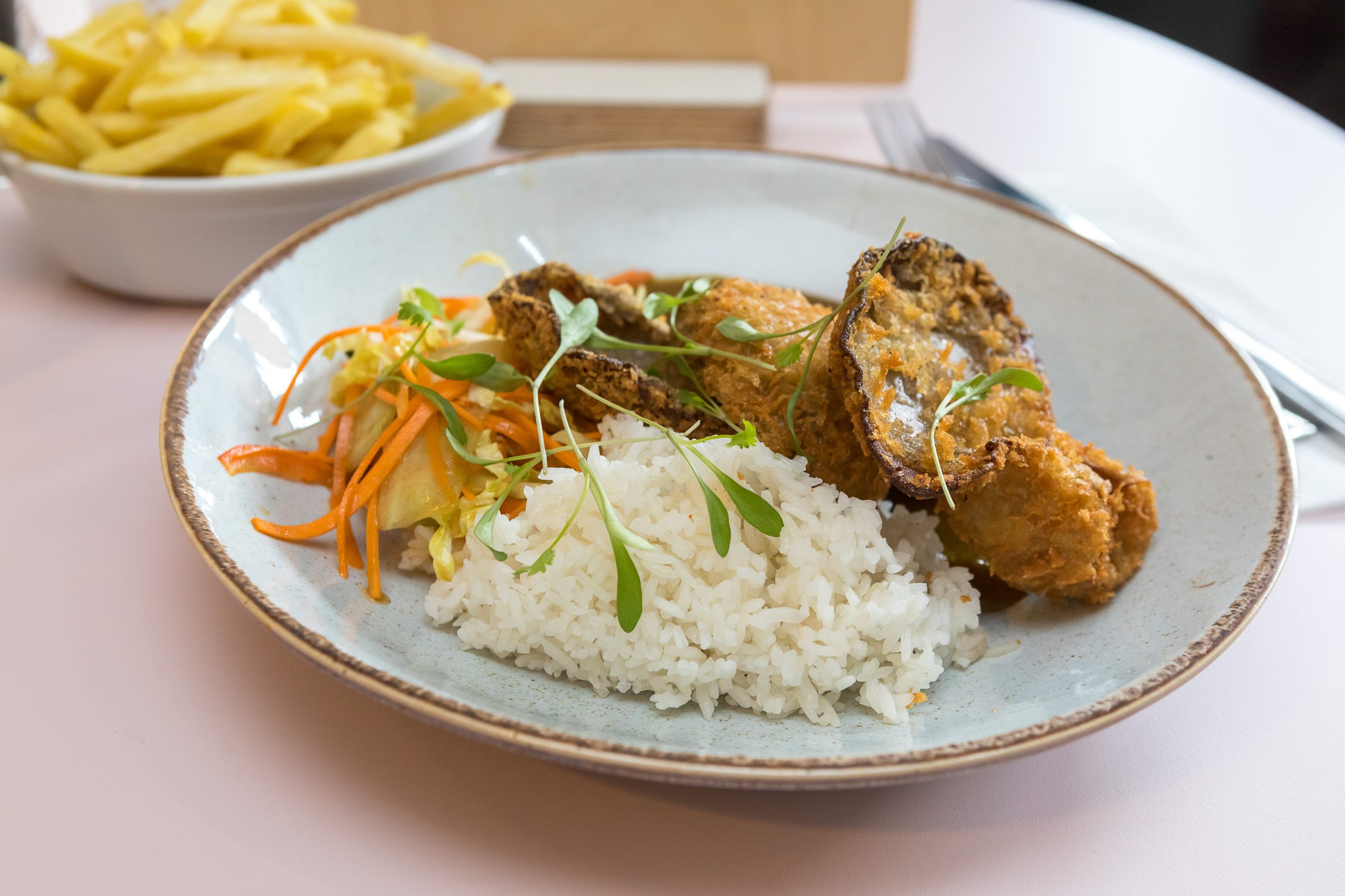